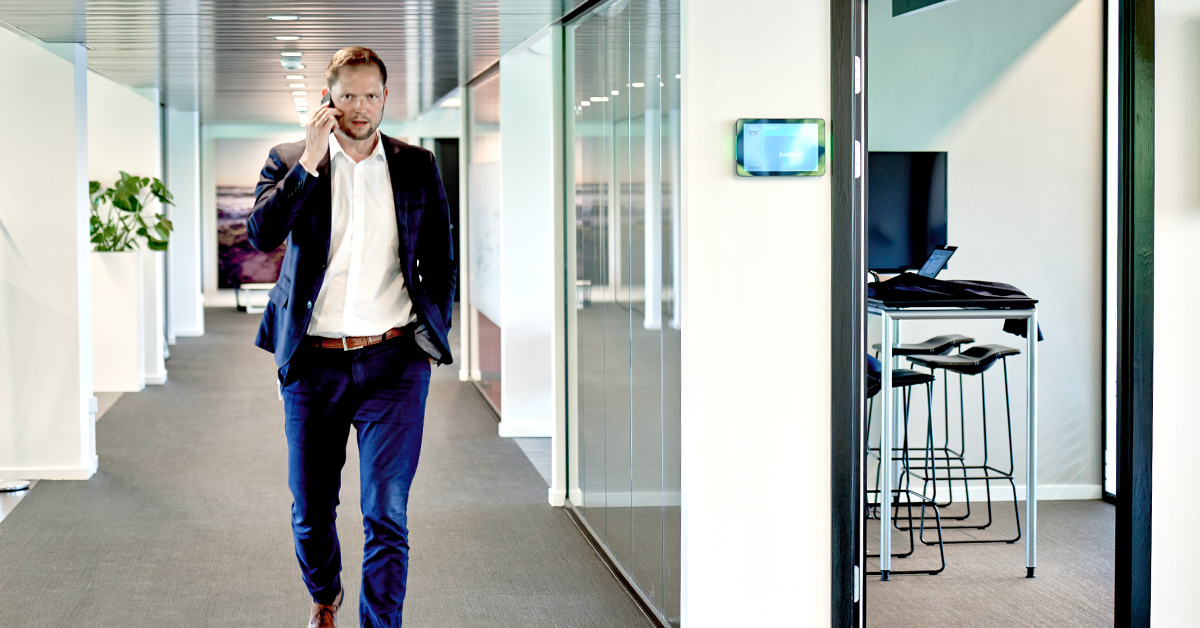 When hearing about governmental politics, we encounter a lot of information, some official - some from different observers and commentators. We frequently hear about internal turmoil or even crises in the government, and from time to time we see a minister leaving or switching office for one reason or another. Such changes are, of course, recorded in official annals and publications - but rarely do we take the time to actually put a visual face and pattern on this data. If we could do that, it might prompt us to ask other - perhaps more interesting - questions - and hopefully, get interesting answers. In today's post, we will use Tableau to make a little data journalistic attempt at visualizing political data. 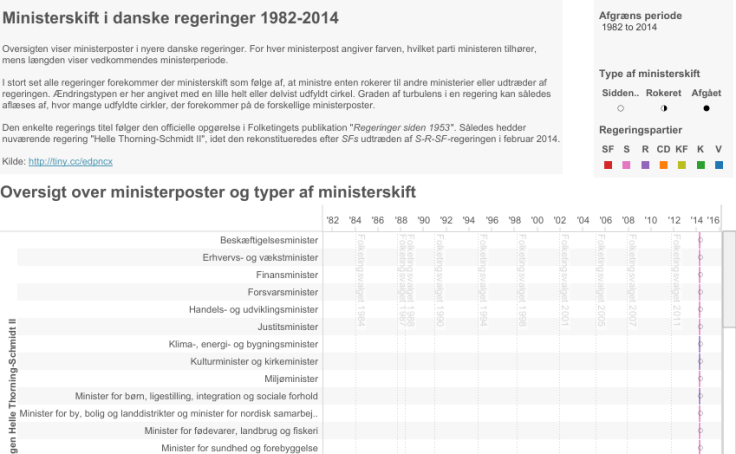 Many things can cause a minister to leave his or her ministry. For instance getting dismissed, leaving for personal reasons (like illness) or moving on to heading another ministry as part of a minor or major reshuffle of the government. The Danish Parliament, Folketinget, makes an official publication, "Regeringer siden 1953", that lists the different governments and their internal changes through time. In the document, you can see what political parties were in government at a given period and the time and nature of changes within the heading of the ministries is listed.

However, if this is your only source of information, you will need to spend a lot of time to get the full picture of all the changes happening. For instance, the current Danish government has been characterized by a notoriously large number of intra governmental changes. So far, 14 out of 23 ministerial heads have abandoned their post untimely - not "just" changing office in the government but leaving the government altogether. But that does not show easily in a text document (and is actually not even listed in the referred document yet).

This made me think, that perhaps a visualization of this information could provide some interesting patterns and answers to some questions we may have. For instance:
How is the present government composed (of different coalition partners)?
How does this government compare with earlier governments - e.g. in terms of composition, number of ministries and time in power?
Are intragovermental changes prevalent in all governments - and what kind of changes are we talking about?

With these questions in mind, let's make a visualization that shows government composition over time with a particular focus on the changes occurring on a ministerial level.

Generally, there are two types of changes that can happen to a minister. He or she can change position within the government (taking over another ministry) or can abandon the government. In the visualization, a half dot refers to an internal move, while a full dot means leaving the government altogether (the unfilled dot signifies 'no changes').

So in the visualization, if we see a lot of full or half dots in a given government, this is evidence of internal changes - perhaps even what may be called turmoil.

In the visualization, all ministries of the governments are shown in the rows, and the color tells what political party the minister belongs to. The length shows the periods in office; hovering over the bars provides additional information on the minister.

In Denmark, a government can sit for a maximum of four years between general elections. In the visualization, the time of the general elections are denoted by vertical dotted lines. This makes it possible to also track possible reconstitutions of the governments happening between elections - this has occurred several times.

Investing some time in exploring the visualization, can get you many stories.
Several observations can be made by studying the patterns and symbols.

For instance, the well-known fact (at least in Denmark), that Danish governments are typically constituted by 2-3 coalition parties, and that the government power shifts between right and left wing parties almost corresponding to the decades.

We can also see that the right wing governments of the 1980's had several consecutive short terms in office and repeatedly called general elections. This was done to resolve political issues that had become stuck in Parliament, where the government did not always command a majority. Some of the small political center parties (KF, CD, R) are seen participating in both left and right wing led governments in the 1980's and 1990's, some of them actually later leaving the political arena altogether (CD, KF).

The recent governments of Thorning-Schmidt and Løkke-Rasmussen have both seen a lot of internal turmoil. In the relative short term of Løkke Rasmussen (he succeeded Anders Fogh Rasmussen who left office to become Secretary General of NATO), half the ministers were ousted or otherwise left the government as the new Prime Minister reshuffled the cards in early spring 2010.

The current left-wing government took office in October 2011. Two-thirds in, 61% of ministerial heads have abandoned their office, the SF party, for the first time participating in a government, accounting for most of the exits. Foreboding, if you picture a linear trend - Thorning-Schmidt would, technically, be 'last woman standing' way before the end of the four year electoral period.

Countless stories live in visualizations - and as we scan the picture and start interacting with the information, we find interesting patterns and contrasts to what we we might have expected. We now find ourselves in an exicting process of querying the data, digesting the answers and finding new questions to ask.

A word of thanks
This visualization has been in the making for some time. Structuring the data and making the right framework took some effort, and almost all the initial ideas pertaining to look and structure came true.

Any questions?
Please reach out to info@inspari.dk or +45 70 24 56 55 if you have any questions. We are looking forward to hearing from you.