If you popped by this blog, chances are that you work with BI or data analysis or just find visualization of data interesting. You probably see many visualizations everyday - perhaps you even make some of them yourself. But dealing with a visualization, how do you know if it contains C.R.A.P. or the opposite? That's todays topic.

The effect of applying design principles to your data visualization.
Once again, The New York Times has featured a stunningly beautiful and insightful data visualization.
The visualization takes a look at women breast cancer in the US. It focuses on the disparities between the mortality rates of black and white women, where a considerable gap persists. The visualization has a little interaction in the sense that a slider let's you explore the years between 1975 and 2010 - I recommend you to try it out.

It sometimes makes me wonder how NYT consistently manage to come up with such good visualizations. But in reality, I think the answer is simple. Apart from having excellent craftsmen and lots of experience, they follow a design recipe when they build their visualizations. There may be some secret ingredients in that recipe, but obviously, the C.R.A.P. Principles of Design are present in the mix.

An acronym easy to remember, the C.R.A.P Principles of Design were formulated by Robin Williams *) and refer to the four basic principles of design that appear in every well-designed piece of work:

Let's try and see how you can use these principles in your visual design by seeing how they apply to the NYT graphic.

Contrast
The first principle states that if two items are not exactly the same, then make them different. Really different. You want to apply contrast to attract attention to important elements by making them stand out and avoid creating similar elements without any visual hierarchy in the information. 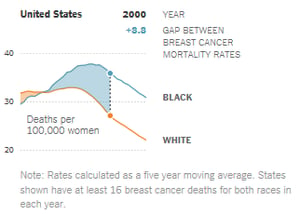 In the NYT graphic, contrasting colors are used for the data series. What is important in this story, is the area between the lines (more than the lines), since this depicts the gap between mortality rates of black and white women. Cleverly, the color is also encoded in the numbers telling the gap size.

Repetition
You will also want to repeat some aspects of your design throughout the entire visualization. This creates a consistent look and feel, because the recurring elements in the layout help organizing the content and establishing a sense of unity.

In the NYT graphic, this is accomplished by repeating the chart type to display different aspects of the data. We refer to this type of display as a 'small multiples display'. NYT has used a single simple chart type, and each one uses the same layout. Once the reader is familiar with the top chart element, she can easily digest them all and do interesting observations on a single state. And she can visually compare patterns and levels between states. The uniform Y-axis and the horizontal gridlines which cut across all charts make these inter-state comparisons possible. Notice, we only need a Y axis at the left of each row of chart elements since we have the gridlines - this helps making the design simple and elegant.

In the small multiples matrix, the states are sorted descendingly after largest gap in 2010 - another little affordance you would expect to find in a good data visualization.

Alignment
When doing your layout, observe that nothing should be placed arbitrarily on the page. Every item should have a visual connection with something else. 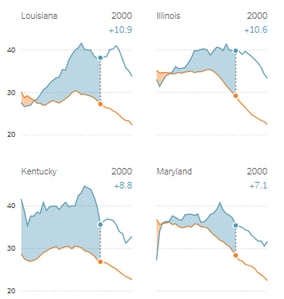 In the graphic, the charts are deliberately placed in a grid structure created by white spacing in between the charts.
This creates a discrete table structure of rows and columns in which to place the small multiples.
Leaving nothing to chance, all labels in the charts are also clearly aligned - state name to the left, year and gap size to the right.

Proximity
The fourth principle states that you should group items close together if they are related. The sheer physical closeness will imply a relationship and create the impression of one visual unit. Separating items, no surprise, has the opposite effect. It may sound rudimentary, but it is a powerful design principle. An important benefit from this is that grouping the items organizes the information and eliminates useless clutter in your visual design.

In the NYT graphic, using white spacing separates the graphic elements into clearly distinct groups. At the same time, text and value labels of each chart are placed close to the actual chart to which they belong. Notice, that avoiding borders around each chart (or background) makes for an overall light structure and actually ensures better possibilities of comparison between the charts.

Good data visualization takes time and a lot of practice
Surely, the visual team at New York Times would tell you the same. But the journey towards high standards has to start somewhere - like learning some design fundamentals. That will help taking a lot of guesswork out of your labor and endavors. It will also be a good guide towards effective visual design. So before you set out to make your next data visualization, be sure to know the design principles, put them into action and grow the impact of your message! That's what keeps them readers coming back!

Throw your server off balance

…Balanced Power Plan that is

Caring about nature is most certainly a likable trait. But did you...

Maybe you are using views as a layer between your tables and your users. If you have a lot of views...